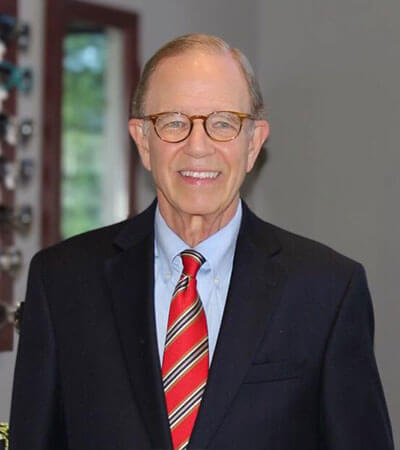 Matthew Wesson, M.D. is pleased to announce his retirement from Wesson and Mothershed Eye Center as of June 1, 2021. Dr. Wesson, a Tupelo native and board-certified ophthalmologist, practiced for 44 years in Tupelo after practicing for two years in the U.S. Army at Ft. Campbell, KY.

He began practice here in 1977 with his father and brother, and leaves a busy practice that includes two other ophthalmologists, four optometrists, and a Medicare-certified surgery center.

Dr. Wesson states he is blessed to have witnessed and been part of numerous monumental changes in eye surgery and medicine in general.

Dr. Wesson is a native of Tupelo who graduated from Milsaps College and attended UMC Medical School in Jackson, Mississippi.  He interned in Denver, Colorado and completed his ophthalmology residency in Jackson, Mississippi as well.  He is board certifiied in ophthalmology and a member of numerous other professional organizations including the American Medical Association, the American Society of Cataract and Refractive Surgery and the International Society of Refractive Surgery of the American Academy of Ophthalmology.

Dr. Wesson served two years in the Army at Fort Campbell and has been in private practice in Tupelo since 1977.  His practice emphasis is in cataract surgery, including the new premium lens implants that allow patients to have improved distance and near vision with less dependance on glasses after cataract surgery.  In his career he has performed over 20.000 cataract surgeries.  Dr. Wesson also enjoys serving others in medical mission trips to underserved areas of Mexico where they perform cataract surgery on patients who have reduced sight or near blindness due to advanced cataracts.  He has also been selected by his peers as one of the best doctors in America, southeast region.

Dr. Wesson is married to Hope Chaney from Louisville, Mississippi.  They have three children, Margaret, Matthew and Betsy.  He is very active in Calvary Baptist Church where he sings in the choir and is a deacon.  As for other hobbies, he currently is president of the board of the Tupelo Symphony Orchestra, a board member of the North Mississippi Knife Collector's Club, and a lifetime member of the National Rifle Association.